I got nostalgic over Christmas and decided to draw the Shorncliffe Pier. The pier has been closed for several years now because some of the support timbers have rotted away. Our local council decided that having the general public walk on the pier in the condition it was in, was just too much of a risk. The pier is one of the longest piers in Australia and stretches out into Bramble Bay by over a third of a kilometre. The barricades were put up in mid 2012 and it will be fully repaired by 2016. Yep, there are quite a few people feeling nostalgic for the pier.

When I’ve made my mistakes 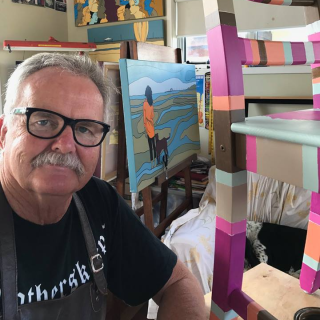 Let me see .... I love dogs and especially bassets (hope that's spelt right). I live on the eastern seaboard of Australia in Brisbane with my wife Babs, Zack (dog) Milly and Lucy (cats) . Ooh .... and life is good. (Did I mention that I love bassets?).

The thing I do instead of watching television

Thinking about my sketches and paintings

When a woman tells the truth she is creating the possibility for more truth around her. Adrienne Rich

Riding in cars with dogs

I can always see a mistake

this is... The Neighborhood

the Story within the Story

4 kids in 3 years: reflections on motherhood, art and life.

Polish girl married to a Hongkonger, based in Hong Kong

The Art and Life of California Artist Vincent Farrell

postcards of the hanging

You Monsters Are People.
Thought Catalog

Thought Catalog is a digital youth culture magazine dedicated to your stories and ideas.

Off The Wall: Artwork And Sketches